Getting lean is certainly not a child’s play. Besides following lean muscle workout plan, there’s lot more that needs to be done. One such aspect that many individuals often neglect is to use a specific supplement for lean muscle growth. Sure, your regular protein supplements may just work fine for building muscle, but when it’s about carving out a lean physique, you may need to switch over to a specific set of supplements. Well, if you are trying to lose fat and get lean this season then here’s something that will help you. Read along as I outline best supplements for lean muscle in this article.

Creatine, the supplement that certainly deserves to be placed atop in this list, is one of the most consumed lean muscle supplements by athletes all over the globe.

Time and again, studies have demonstrated creatine monohydrate as a successful supplement to get lean. Infact, one of the statements published by International Society of Sports Nutrition in their position stand on creatine supplementation and exercise stated – “Creatine monohydrate is the most effective ergogenic nutritional supplement currently available to athletes in terms of increasing high-intensity exercise capacity and lean body mass during training.”

What creatine supplement does is that it provides an additional phosphate group to adenosine diphosphate which further utilizes it to produce ATP molecules. ATP molecules are our body’s primary energy source. Thus, increase in energy supply may lead to better anaerobic exercise capacity, strength, and lean body mass in combination with training.

Talking about supplements to build lean muscle, creatine is surely worth a try. Here’s why – Back in 2003, a meta-analysis conducted on the effect of dietary supplements with resistance training showed creatine to not only augment lean muscle growth but also strength gains.

The best way to increase muscle creatine stores is by ingesting 15-20 grams a day of creatine monohydrate for at least 3 days (loading phase) followed by 3-5 grams/day (maintenance phase) for next few weeks.

Put simply, BCAAs consists of three essential amino acids – Leucine, Isoleucine, and Valine, which are collectively a major energy source for your body during exercise. Supplementing with BCAAs creates a positive nitrogen balance in the body which is infact a crucial phenomenon to grow lean muscle.

A study has shown that Leucine (one of the three BCAAs) plays a significant role in increasing levels of amino acids in muscles and thereby allowing skeletal muscles to alleviate protein synthesis.

Related – The Many Benefits of a BCAA Supplement

Another amino acid that makes it to this list is none other than Glutamine. Glutamine is the most abundant amino acid found in the human body. It is found in large quantities in various poultry and dairy based products.

Glutamine is popularly known for its ability to diminish the muscle breakdown during prolonged duration of exercise which can possibly lead to increase in strength and performance. Such findings were confirmed by a decade-old study in which subjects upon supplementing with glutamine were asked to run for 120 mins outdoors. The study found out that glutamine supplements were effective in reducing the accumulation of ammonia levels in the blood (a key factor in reducing performance) and hence improved performance output.

Similarly, people who are indulged in weight training will find that supplementing with glutamine will help them lift heavier weights for long intervals. So, when you train more often and push your limits each time, you get stronger and leaner.

Apart from this, glutamine is also touted for its ability to improve growth hormone levels in the body. It is an important consideration for people focusing on lean muscle growth, as mere 2 grams of glutamine supplementation can hike growth hormone.

For good results, you may want to take 5 grams of pure glutamine on each of these occasions: first thing in the morning, post-exercise and before bedtime.

Related – 4 Glutamine Benefits You Should Know About

For people of who don’t know what on earth Beta-Alanine is, here’s your quick guide – Beta-alanine is the fundamental unit of carnosine. Carnosine is a molecule that helps buffer acid in the muscles. It also helps in increasing physical performance output in 60-240 second range.

The primary aim of the beta alanine supplement is to increase the fatigue onset time of your muscles during a workout. It is accomplished by reducing the production of lactic acid in the muscles. Lactic acid is the compound that builds up during exercise. It produces a burning sensation in your muscles and makes them tired early up. Diminishing the levels of lactic acid will ensure that your muscle works to their fullest potential and generate best results.

The usefulness of beta-alanine as one of the best supplements for lean body was confirmed by this study conducted on collegiate wrestlers and footballers. The study showed that the subjects who were put on bet-alanine supplementation had a greater increase in lean mass than those on placebo.

Quite similar results were drawn from a 6-week study performed on athletic women. The primary aim of this study was to assess the effect of beta-alanine supplementation in improving cardiovascular fitness in women. Under this study, forty-four women were randomly assigned three groups – beta-alanine, dextrose powder, and placebo. At the end of the study, it was found that beta-alanine group had a higher increase in lean muscle mass than the rest two groups.

Try taking 3 grams of beta-alanine per day. People usually complain of a tingling sensation after ingesting beta-alanine, but there’s nothing to worry as it is just a harmless side-effect.

You might have often used caffeine for its energizing upshot, whether by consuming your early morning coffee or possibly from a pre-workout supplement shake.

But know knew, caffeine can occupy such an important place among other supplements for lean muscle. Here’s more to the story – Caffeine has been proved effective for enhancing performance in athletes when ingested in low-to-moderate dosage. It has also shown boost strength gains and endurance, delay the commencement of muscle soreness and perk up focus and concentration during training.

Besides all this, caffeine is highly involved in mobilizing fat from fat cells, pooling them into the blood where they can be effectively used as energy. It also acts as a stimulant for other supplements, allowing them to stay effective for long periods of time.

According to Int’l society of Sports Nutrition, a dosage of 3-6 mg/kg is highly efficient in reaping maximum benefits from caffeine supplement.

I saved the best for the last. Beyond doubt, protein shakes whether whey protein or casein protein are among the finest supplements to build lean muscle. There are several ways a protein shake helps you to enhance your lean muscle growth.

The first is that protein-rich diet has shown to improve satiety levels and increased energy expenditure, keeping you full for a longer interval of time. The longer you stay full, less likely you are going to overeat, especially junk foods. Secondly, this protein shakes, specifically the ones with whey protein, are well-off with branched chain amino acids content. And as I mentioned previously, BCAAs play a major role in the fat-burning process in your body.

Apart from this, several studies have highlighted the ability of protein shakes in augmenting strength gains and lean muscle growth in individuals. Take for instance this 10-week long study which demonstrated that consumption of protein and carbohydrate pre and post exercise increases lean body mass and 1 rep max strength in trained males.

Whey, Casein, Egg and Soy are some of the best protein shakes available in the market. I have already outlined the major forms of protein powders in this article – A Comprehensive Guide to Different Types of Protein.

While fast-acting protein shakes like whey protein is good to use before and after exercise, slow-digesting protein like casein protein is beneficial before bedtime.

Related – Casein vs Whey Protein: Which One is Best for You

4 Glutamine Benefits You Should Know About

Glutamine vs BCAAs: What is the Difference 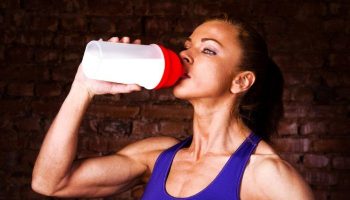